Hugo 356 wrote: ↑Sun Oct 16, 2022 11:50 am Check your classic car insurance; many policies have breakdown recovery included - remember to carry the phone number with you

Club is a misnomer; the RAC is jointly owned by private equity / Singapore's sovereign wealth fund. They may prioritise making money over getting you home quickly...

Hugo 356 wrote: ↑Sun Oct 16, 2022 11:50 am Check your classic car insurance; many policies have breakdown recovery included - remember to carry the phone number with you

Club is a misnomer; the RAC is jointly owned by private equity / Singapore's sovereign wealth fund. They may prioritise making money over getting you home quickly...

Clive,
I had house and car insurance with Chubb for more than 20 years. Two years ago the premiums rocketed on house and cars. Subsequently moved to Zurich who may offer a breakdown service too. Need to wade through the 30 pages of the insurance document to ascertain the position.
Rust Never Sleeps
Top

I’ve got euro cover via my classic line insurance.. of the times I’ve needed it I’ve been home only a few hours or so after I’d have s expect to arrive ( sans car.. it’s turned up a week later )
James

Its not how fast you go, but how you go fast

James a mate of mine has Classic Line insurance and has been promptly recovered several times. My insurance is up in January so will loo around then. Hopefully I will not break down again...........watch this space.
Rust Never Sleeps
Top

Quite a tale! I've only ever had one recovery - that was with the AA. Clever fold out tow dolly in back of the van. 40 minute wait.

Interesting looking at the failed oil line that requires a hydraulic tool to crimp.

I replaced all my oil lines with modern aeroquip push fit. You just put the hose end in hot water for a few seconds and push it on to the fitting. No crimping required and good for 250 PSI. Fittings are black alloy - look great and light as a feather too albeit not 'period'.
Jonny

Interesting looking at the failed oil line that requires a hydraulic tool to crimp.

I replaced all my oil lines with modern aeroquip push fit. You just put the hose end in hot water for a few seconds and push it on to the fitting. No crimping required and good for 250 PSI. Fittings are black alloy - look great and light as a feather too albeit not 'period'.

Jonny,
Considered modern alternative oil lines for the build but went with as close to 'period' as possible. If they had been crimped properly in the first instance and if I had been more vigilant there would have not been an issue. Still it is done and dusted.
Rust Never Sleeps
Top 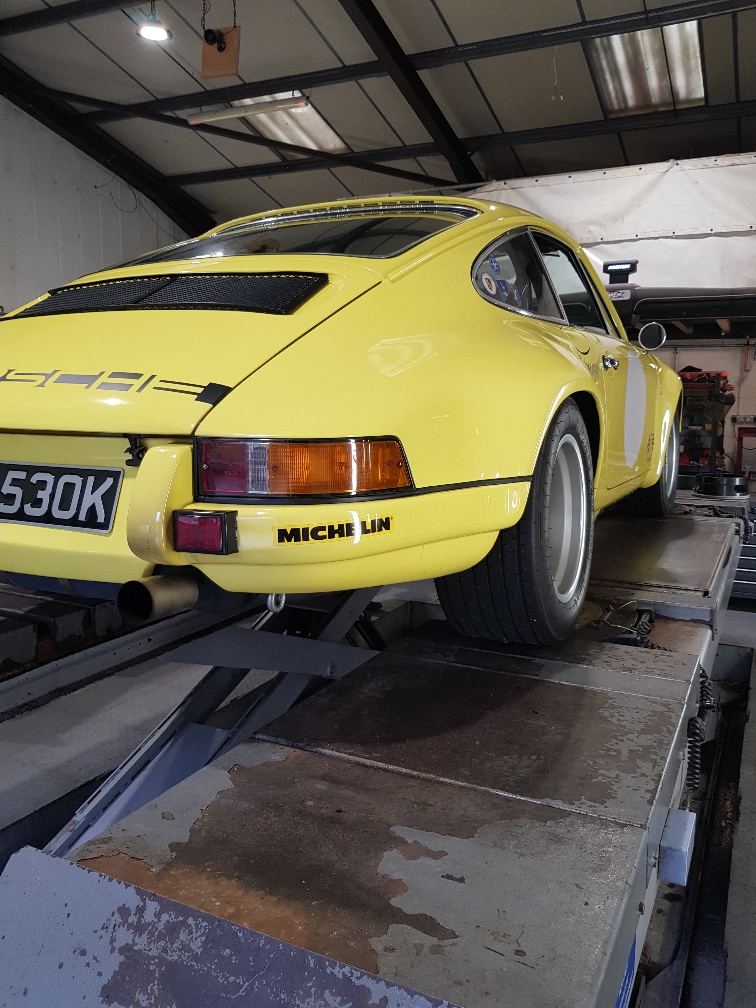 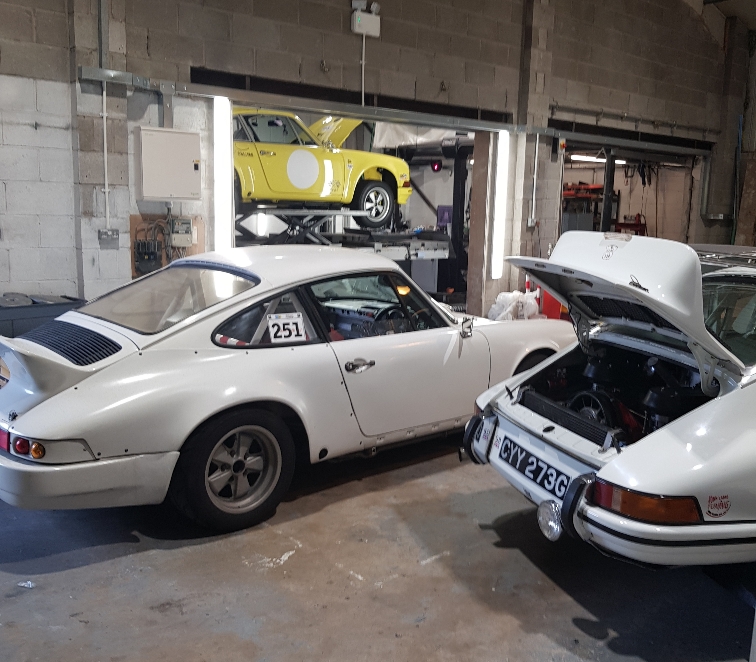 Having sorted the failed oil line I thought it was time to address something else which would take the development of the car forward rather than dealing with things gone wrong.

Although the car had been set up by Autofarm first by something of a 'stick and string' method and then on some fancy suspension geometry kit I was not entirely convinced that the car handled as well as it might. Or put another way I like to think, probably wrongly, that my driving ability exceeded the competence of the car. Arrogant? Probably.
There were things about the handling which I was not sure about:
Turn in was generally good but I felt it could be improved upon.
On tightish bends or roundabouts the steering loaded up and especially on broken surfaces the front end would 'skip' a little. I attributed the "skipping' to overly hard dampers at the front.
On entering a sharp a bend, and carrying too much speed necessitating mid bend steering correction to avoid the front end running slightly wide, there was a limited steering response.
Changing lanes on a motorway, for example, required what I felt was a significant steering input.
The car had a tendency to pull to the left on roads with a big camber. I accepted that some pull like this was not unusual but it was the degree to which this happened I was unhappy with.
There was the occasional noise from the rear on broken road surfaces.
I have read countless accolades to Centre Gravity but was always a little sceptical. Given that the same kit Hunter or Biesbarth was used in lots of places how could Chris Franklin of CG be any better? Despite the above reservation I booked the car into CG and after a couple of months wait ( they are that busy) arrived at 8.30am in Atherstone. It's a two hour drive from my home so this had better be worthwhile.
Chris asked me about my impressions of the car and what I was trying to achieve. He then drove the car around a route they use: fast dual carriageway with good road surface, lots of roundabouts, hump back bridge, poor surfaces B roads, cobbled road etc. The idea I think is to replicate as many road variations as possible to see how the car responds.
He asked what bushes I had on the suspension and he was satisfied that I had fresh , from the rebuild of the car, standard 'rubber' bushes.
Back on the ramp the tire pressures were checked and measurements taken between wheels and wheel arch. A preliminary "before" was taken of the geometry settings using the Hunter kit. First the rear and then the front suspension was "jiggled" up and down to assess the performance of the dampers and a graphical read out was produced of the up and down oscillations. Front dampers far too stiff as expected. The rear was fine. Then on to setting up the suspension. Adjustments made and Hunter consulted for the result. Car taken out by Chris for a test drive. Back on the ramp and further adjustment. Another test drive. And so on. Chris continually told me what he was doing which I was interested in. Of course there is the option just to leave your car and collect it later when it is done.
When Chris felt the set up was right I took the car, accompanied by Chris, to a drive around the locality. A very distinctive difference in the way the car handled. The issues described earlier sorted except that the damper inserts at the front needed replacing with something a bit more compliant. Surprise was that the rear drop link bushes were old ones and not new so they were replaced. This was the noise from the rear of the car. Minor wear in one of the steering rack bushes. This is a job for another day.
I finally left around 6.00pm. Awful journey back in the dark and pouring rain and headlights pointing about three feet from the front of the car. First time used in the dark.

Post Script
So the "stance" of the car is not so "cool" being level as opposed to a slight nose down attitude. Chris at CG consulted me on this as was the slight increase in rear ride height. These are not considerations when the object of the geo was to get the best handling and predictable car.
Was the time spent worth it? Most definately. The major benefit is that I have a great deal more confidence in the car when 'pressing on'. The behaviour of the car is excellent baring the overly hard front dampers which will be changed. Grip levels are at a point which I did not believe was possible in this kind of car. Some of that grip is obviously attributable to the TB15s, which are a superb tire, but the rest is definately down to the skill, expertise and understanding of chassis dynamics and the interplay between various elements of the suspension. Chris is something of a genius. My scepticism of CGs value is completely banished.
Rust Never Sleeps
Top
Post Reply
384 posts