Finally after 16 years of ownership and a dormant period of about 12 years it’s time to blow the dust off of my 911. On Sunday I moved my 911 from the garage at home to a friend’s workshop where we can hopefully finish the job. 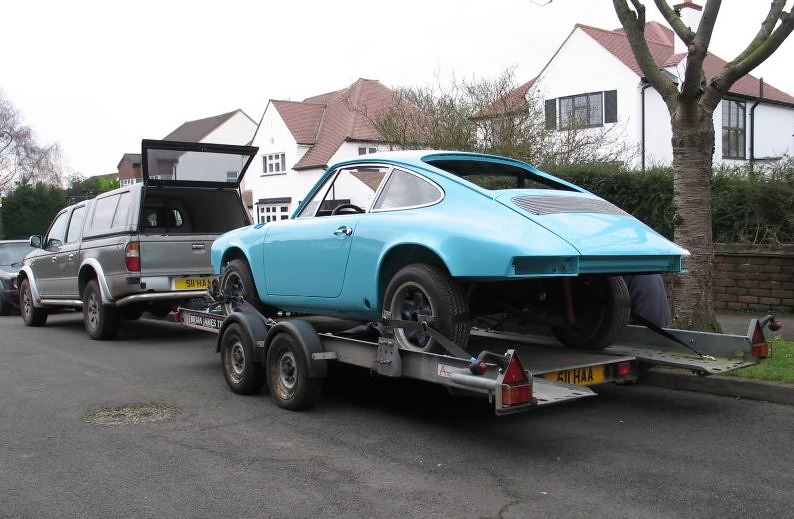 I purchased my 1970 911E off of Peter Andrews and Trevor Messett on 15th January 1997. It appeared to be either a race or track car with bucket seats, harnesses, stripped interior, big rear arches and a fibreglass lid with a big spoiler. It didn’t look too badly rusted just a little tired and being partially stripped I thought that there was nothing hidden. The original engine and gearbox were not with the car. A deal was done with Peter for a 2.4E engine which involved a trade for some SWB parts from a 1966 912 which I had broken up the previous year. Unfortunately I do not have any pictures of the car as it stood when I first got it.

My idea at the time was not to undertake a restoration but to build up a Hot Rod type of car and this is still the current plan today. I had owned a number of aircooled VW’s in the past (1986-92) and had completed most of the welding and restoration myself but I was now involved with home renovation & building work and with a growing family spare time was in short supply. Luckily for me good friend and expert bodyman Tim Carter was on hand to help. Tim was Porsche trained and has worked for a few of the 911 specialists, including straightening out of a very well known ST after an off-road skirmish.

Tim commenced the strip down and as in most cases things were a little worse than I expected, but luckily the rust was nowhere near as far progressed as what we see being taken on in some of the other restoration threads here. There were various rust repairs in the inner wings and a lot of the metal in bottom of the shell was replaced with new. Panels replaced with new were rear quarters, inner & outer sills, jacking points, kidney bowls, tank support panel, slam panel, near side’ A’ post and floor pan halves. The doors, front wings and engine lid were replaced with good second hand items sourced from the Husborne Crawley auto jumbles. The underbody coating was cleaned off by me with a combination of heat gun and 3M bristle discs then the bare shell was taken to Cleaning Consultants in Loxwood where all of the inner wing areas were blasted and phosphate coated. 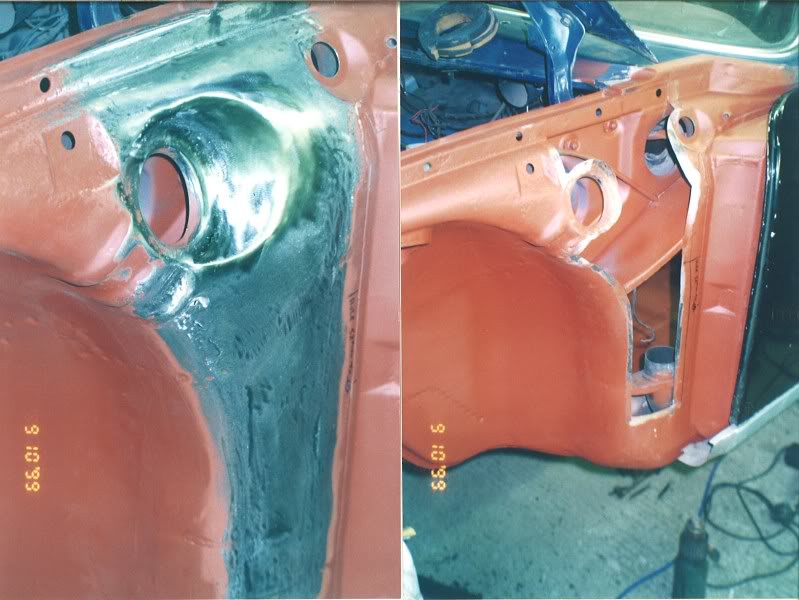 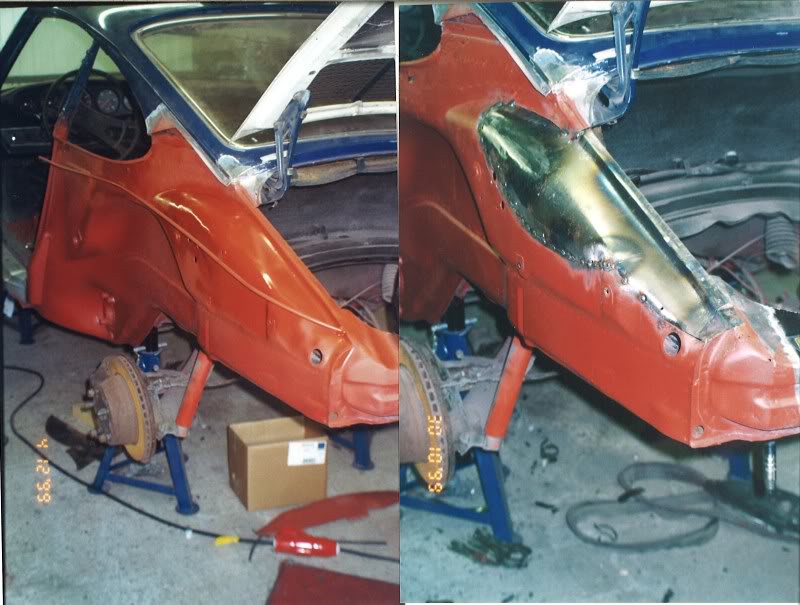 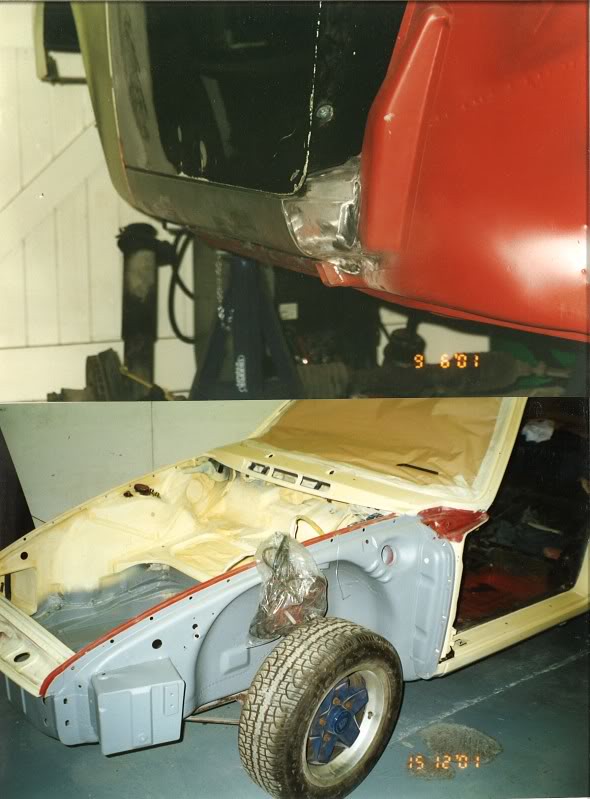 The panel fit is all good and I was recently complemented by a well known 911 expert when he saw the car on the quality of the metalwork and the fit of the doors and panels. Panel fit and door gap now seems to be a lot more critical than I appreciated at the time.
Once all of the metalwork was completed the shell was transported over to Concept Classics in Dorking where the remainder of the paint was stripped off and the engine bay and under bonnet area was cleaned up prior to the fresh coat of Turkis Blue being applied all over. At this time I had not seen another 911 in this colour even though it was a period 1970 colour. 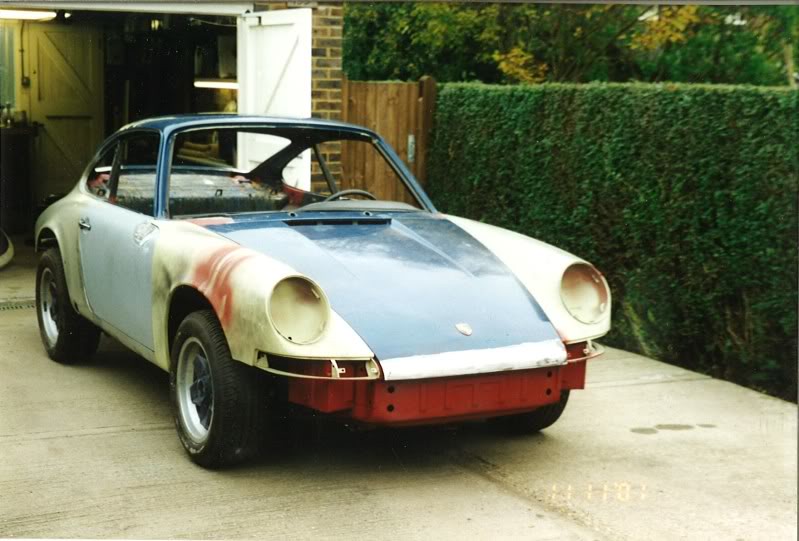 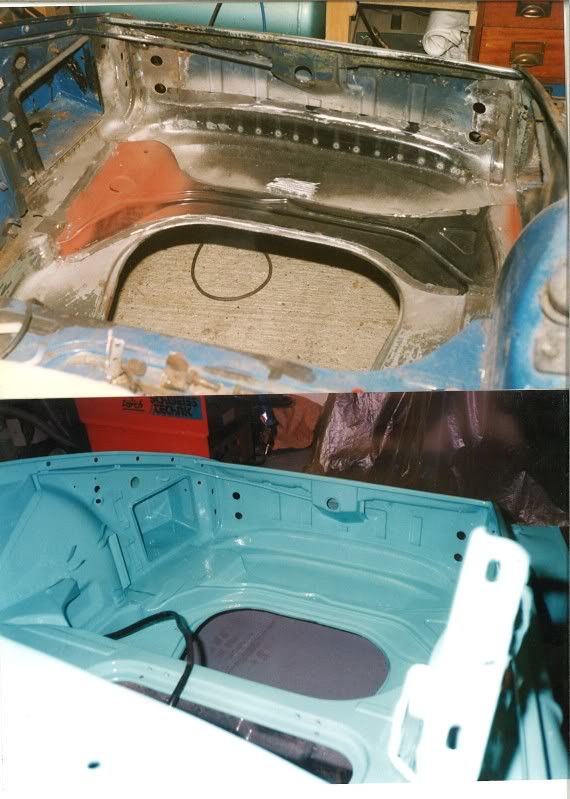 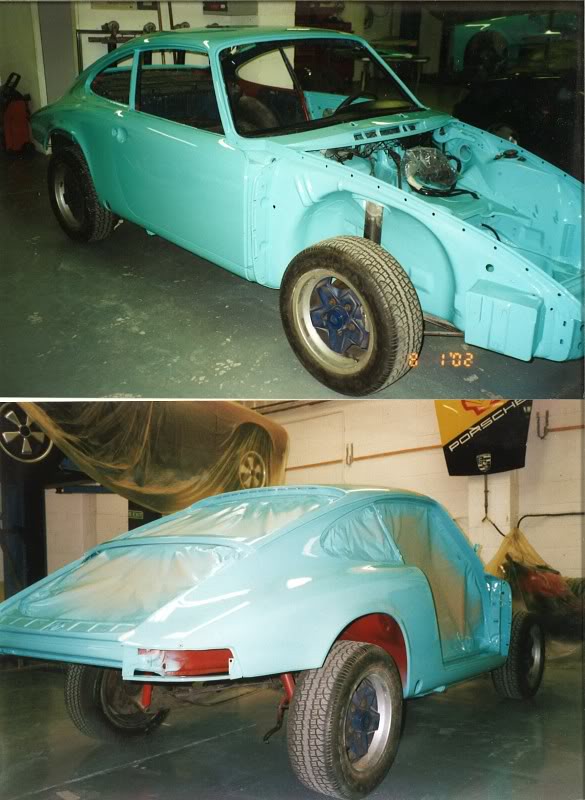 Whilst the paintwork was being taken care of the 2.4E engine was left with another friend – Jez Parsons of Carrera Performance (GCS) in Horsham. The engine was stripped down and found to be in fairly good shape. During reassembly various parts were replaced, those that I can recall include oil pump, timing chains, piston rings, valve guides, bearings and a small repair to one of the heads.

The shell was transported back to my garage and Tim made himself busy refitting the panels, doors and black headlining.
Then work stopped! Family pressures and then the need to move to a bigger house took priority and as we all know this leads to a lack of ‘hobby cash’.

Nothing much happened over the next few years as priorities lay with the house, wife and kids. Various odds and ends were purchased when they came up and the correct (rebuilt) gearbox was bought from Derek Quinn. I had been after a set of American Racing Torq Thrust wheels for quite some time and via DDK I was contacted about three for sale in Holland. A deal was quickly done and luckily I found five more on a small 356 forum a year or so later in Colorado so I now had two complete sets. I also have some wide steels and a set of 7R spec modified Fuchs that came to me via Andy Boyle – I still haven’t decided on which wheels to run. 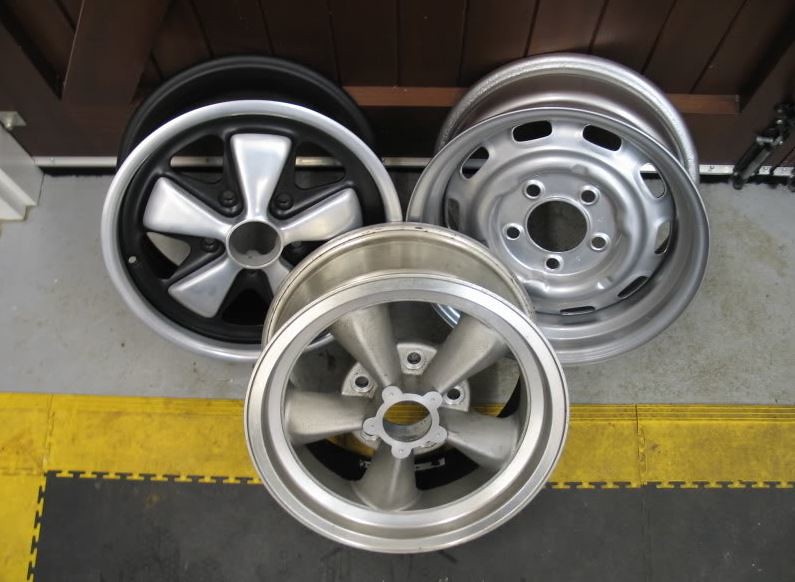 I recently bought a pair of BF Torino Safari Rally seats and harnesses to go with the half cage that I hope to see shortly. Some stripes or custom paint would be nice too but I’ll have to see how the finances work out. 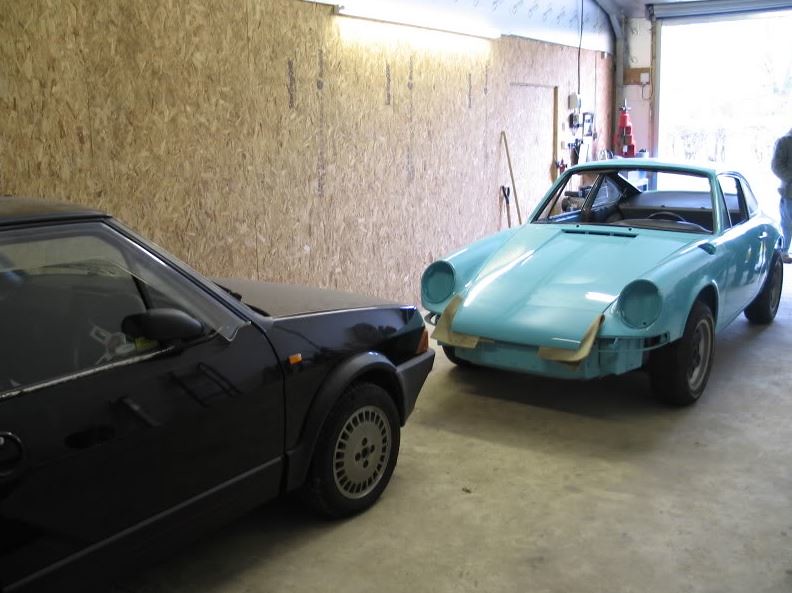 Now the time has come to restart where I left off twelve years ago. The car is now in Tim's workshop in deepest Sussex and the engine is going back to see Jez for a quick check over after spending the last ten years buried in my Dad's shed. There appears to be no deterioration of the paintwork just a couple of small dings – one from a ladder and the other from one from a stray bike, luckily nothing too serious. You never know this maybe the year it sees the road? I have started this post to keep myself motivated and focussed on finishing the old girl off. Don’t expect daily updates but I’ll try and keep this updated as regular as time and money allows.
Last edited by Ralph on Thu Jul 13, 2017 3:27 pm, edited 12 times in total.
Ralph.
1970 911E
viewtopic.php?f=28&t=41800
Top

Great to hear you're pressing on again, the car looks great.
It really is a fabulous colour.

Good luck. Will look forward to your updates. The Dr is luking somewhere in Sussex too. Check out his restoration thread(s) on here.
“A REMINDER. I would be grateful if those members who have borrowed bits from me in emergencies (e.g starter motor, oil cooler, etc) would return them and/or contact me”. – Chris Turner RIP
Top

Cool car. Hope you get it on the road and keep us updated

I echo Paul's comments - great to hear it's being ressurected after all this time !
Andy

What, even about the colour? Surely not!

What, even about the colour? Surely not!

Yes - it is a fabulous colour !

All good things comes to those who wait. Very nice colour, hope the finishing off goes well...and speedy.

My Google search bar knows two words and they both begin POR..
Top

Always had a lot of time for Trevor RIP

Thanks for the comments guys.


Cool car, given the colour maybe a set of Centras with redrilled hubs would help the wheels dilemma?

Ralph wrote:Thanks for the comments guys.


Cool car, given the colour maybe a set of Centras with redrilled hubs would help the wheels dilemma?

Wow 16 years in the making!

Keep the updates and photos coming, everyone will welcome the progress and this is one car we want to see on the road.

Good luck and hope all goes well with the run-in.
Darren